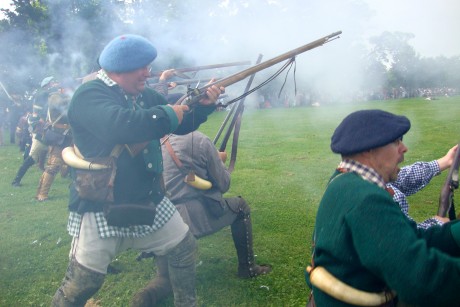 I’ve been involved with reenacting for most of my adult life, sporadically but intensely. And to be perfectly honest, as a historian I have truly mixed feelings about that. In part, it’s the whole “honoring one’s ancestors” aspect of reenacting / living history, which I’ve never fully understood; in part it’s the notion that someone who has never done primary-source research, has perhaps watched a documentary or two, and partially absorbed a secondary source (usually dubious) can tell a wide-eyed public that he/she is a “historian.” But more about that later. I want to ruminate on this for a couple of days and write something up. And if anyone is reading this, I’d like to read their opinions about the merits/flaws they see in historical reenacting … let me hear from you.

8 Comments on “Embedded with the reenactors – American History – Salon.com”

Buy THE WHITES OF THEIR EYES now! Now! Do it!