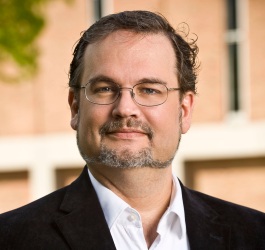 I’ve been a history professor at Wright State University – in Dayton, Ohio, the home of the Wright brothers, Paul Laurence Dunbar, the inventors Charles Kettering and Edward Deeds, and the birthplace of the Cheez-It – for more than thirty-two years. I came here directly, as a freshly-minted Ph.D., from Purdue University.

I started my college education bound and determined to be a Civil War historian. That didn’t last long. Soon I grew frustrated that Civil War historians then – and now – rarely looked at that conflict set within the broader context of the history of the art and conduct of war. So I explored European warfare of the nineteenth century, then of the eighteenth century…and by the time that I graduated and headed off to Purdue I had moved away from the Civil War entirely. Frederician warfare interested me, and increasingly I became fascinated with the inner workings of Das alte Reich in the time between the Reformation and Napoléon. Purdue was the perfect place to study these topics: I had the great good fortune to study with the late, great (and very demanding) Gunther E. Rothenberg, possibly the pre-eminent scholar of Napoléonic warfare of the time, and with Charles Ingrao, an equally distinguished scholar of early modern Habsburg and German history. I grew interested in the age of the Thirty Years’ War, and my first reading of C.V. Wedgwood’s classic survey history of that conflict somehow brought me to the history of Denmark, and my interests matured somewhat, too. Here I must acknowledge a profound debt to Linda Levy Peck, the renowned scholar of early Stuart political culture, for introducing me to ways of thinking about the early modern state that may not have occurred to me otherwise.

Flash forward to today, and I’m still indulging both interests, namely the history of warfare (especially the history of tactical doctrine, tactical practice, and military technology) and the history of early modern Scandinavia (especially Denmark). Student interest compels me to teach more about the former than the latter – nothing fills up faster than a history course with the word “war” in the title – but I still manage to teach a real grab-bag of topics. European military history, American military history, the history of military technology, religion and politics in early modern Europe, the Thirty Years’ War, the First World War, Scandinavia in the stormaktstid (“Age of Greatness”)…you get the picture. One of the genuinely cool things about teaching at a school like Wright State is that I have the freedom to teach – practically – anything I feel like teaching. By way of example, over the past few years I’ve developed upper-division courses on “Military Technology and the Art of War, 1750-1945,” which is in essence a course on the history of firearms and weaponry, and I think it’s close to being unique. Most assuredly, my course on “Living History” is unique. Drawing upon my extensive experience with the practice of living history, this public-history course examines the history of museum living history and recreational (i.e., reenacting) living history, the use of living history as an interpretive tool at historic sites, and the methods used for “doing” living history – including research in material culture, which is something with which academics rarely concern themselves.

My own research is a bit varied, too. Predictably, most of my single-author books deal with aspects of early modern Scandinavian history: two monographs on the history of Oldenburg Denmark in the wake of the Reformation and the Wars of Religion, a survey history of early modern Denmark, and a survey history of seventeenth-century Sweden. I’ve just finished a microhistory about the murder trial of Danish parson Søren Jensen Quist (more on that later), and I’m getting ready to launch myself into a history of Sweden’s North American colony.

But I still keep my hand in military history, even if it has become more of a secondary interest. I’ve done something a bit different with military history – namely, turning to the world of trade publishing and narrative non-fiction (read “popular history”/ “Father’s Day books”). As a kid, what I liked most about history was the storytelling. Growing up, my favorite authors – besides an odd bunch of nineteenth-century greats like Melville and Crane) – were Bruce Catton, Kenneth Roberts, and McKinley Kantor. Yes, two of those three were novelists. But that’s who I wanted to be when I grew up. To my mind, no author on the Civil War – not even Shelby Foote – can even come close to the skill with which Catton told the story of the war. Read the last chapter of his book Glory Road, the second volume of his Army of the Potomac trilogy, and you’ll see what I mean. That last chapter, called “Valley of Dry Bones,” has got to be the best piece of historical writing ever executed in the English language.

So inspired by the late Mr. Catton, and understanding – grudgingly, mind you – that Americans just weren’t ready for the history of sixteenth-century Denmark, I turned back to my first love: American history before the Civil War, and especially the Revolution. Hence Drillmaster. I grew up in the mid-Hudson Valley of New York, just a tad south of Poughkeepsie, and my favorite memories of autumn along the Hudson involve trips to see New Windsor Cantonment and Stony Point and Washington’s headquarters in Newburgh; Steuben’s headquarters from one of the 1780s encampments of the Continental Army isn’t all that far from where my dad worked near Fishkill. As to Whites of Their Eyes: I can practically smell and taste the moment when I first saw the Howard Pyle painting of Redcoats advancing towards the Breed’s Hill redoubt on that blistering June day. I couldn’t have been much more than seven or eight years old and still that painting just drew me in. So going back to the Revolution was easy, natural, comfortable…and warmly familiar.

So here, on my blog, I get the chance to ruminate on things that may relate directly to my books but more likely will be tangential. Things that strike my fancy (as a historian) from the news, from book tours. And maybe a few observations on historical research drawn from my experiences as a researcher, author, and prof.

I know it seems tacked on, but I do want to mention that I live near Dayton, Ohio, with my brilliant, beautiful wife, Mary, our fifteen-year-old son, Alex, a very needy poodle (named Puddin’), and three cats. Spit, often mistaken for a Maine Coon, is entirely floof and fat – he weighs nearly twenty pounds – and he’s both sweet and stupid, a winning combination; he’s pictured below. Sophia, colored much like Spit but very small, is entirely my cat; Pete is a tiny Russian Blue I bought for my wife for Valentine’s Day in 2020, just about two weeks before Covid hit and the world turned upside down. Pete is athletic, hilarious, and shy; often he goes by “Gollum” or “Doofus” or simply “Hey Dumbass.” I’ve had a few questions about the origins of Spit’s name; suffice it to say that that’s what you get when you let a five-year-old boy name a cat. It could have been much, much worse.

And the Facebook fan page for The Whites of Their Eyes

I want to hear from you!

4 Comments on “About me”

Buy THE WHITES OF THEIR EYES now! Now! Do it!